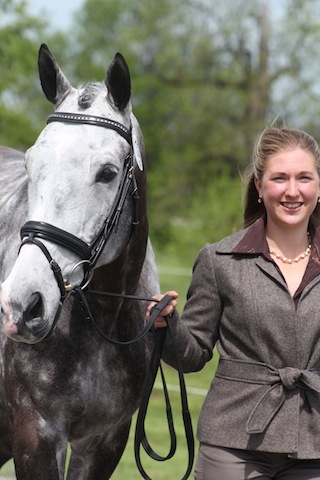 California Gal Tiana Coudray seems to have found a perfect spot nestled in the Gloucestershire countryside at Nick Gauntlett’s base, certainly a far cry from the West Coast of the United States, but she and her eye-catching grey, Ringwood Magister, aka Finn, 2nd at the Blenheim CCI*** last year, have made themselves at home,

“Finn is great, he’s loving it. He’ll go bouncing around his stable, having a proper kick and buck, and leap and rear, all in his box!  He likes to play tricks on everybody, and mess with everyone and give them all great scares, but they’re all learning now that he can be a bit tricky to handle, and he’s very happy and well settled in. When I went back to California for a couple of weeks over Christmas he was just a monster! He almost got away from anyone who led him every time he came out, we had to put extra security on his stable door because he was constantly finding ways to escape and go running about the property! The plan was to have him hacking out while I was gone, but he gave the girls so much grief that Nick had to ride him for me!”

While Finn may not be winning many popularity prizes, Tiana and Nick have forged a strong friendship already, built on many long hours in the arena and a mutual respect for each other’s horsemanship.  Nick, an experienced four star competitor told me that Tiana ending up at his yard was something of a happy accident,

“I bumped into Tiana at Mike and Emma Winter’s who are about twenty minutes away, and she told me she didn’t have much to fill her day, so I said we had loads to ride here, and to come over and sit on a few which she did for a bit. After Blenheim I told her if she wanted to base herself here and ride a few more she was welcome to do that, and it just sort of happened really – it’s absolutely brilliant, it’s working really well. It’s really nice for me having someone so good in the school at the same time as me, and I hope she’d agree that we bounce ideas off each other really well. I’ll be trying to do something and she’ll give me some ideas as to how to do it differently, and vice versa, it seems to working really well.  It’s quite interesting because the way I’d have learned a lot of things, or the way I do things, would be to just get on and make it happen, whereas I think perhaps the American way would be that you’d have a lot of exercises to get something to happen, and so we meet in the middle. I think I’ve learnt some exercises and some ways of doing things to help me get to the end result, and she’s listened to my slightly more ‘come round the corner and hope it happens’ approach a bit! Tiana sits on some of my good horses and she’s been brilliant at helping me put some changes onto some of the horses, she’s very good at that sort of thing, and very methodical at getting that, she’s been a great help, so all good.”

and Tiana echoes the sentiment,

“I think the American style is that riders are really trained and trained and trained, and produced and trained. In general I think English riders tend to ride a lot more off feel and natural instinct, and I think a balance between the two would probably be ideal. It’s really interesting, we’ll be riding around the school on two different horses, talking theory and bouncing ideas around, and hopefully helping one another.” 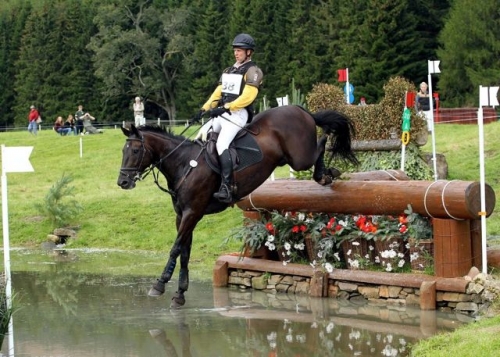 Nick on Arthur at Gatcombe

The yard at Nick’s is just beginning to get busy in readiness for the upcoming season with lots of dressage and show-jumping outings. Nick has about a dozen horses to event, while Tiana of course has Finn, a new intermediate acquisition, and about three or four or the smaller horses in Nick’s yard (Nick is about 6’4) to compete. Tiana outlined her plans for the spring,

“Well, plans with horses are plans with horses, aren’t they?! The intermediate horse we’ll see what he’s all about and maybe do a two star late spring. With Finn we’re looking at a Spring Three Star; I’ve talked to Mark Phillips quite a lot, and with some of the selectors and at the end of the day we decided that the best route with him was to have a really positive, strong result at a Three Star.  We’re still undecided which Three Star we’ll take him to, but the beauty of being over here is that we have plenty of options for that. Nick’s quite tall, so anything small that we have here has become my ride which is just one more thing that’s made it worth being here and made me want to stay in England, for sure.” 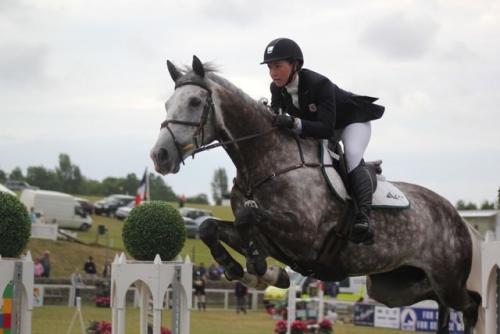 Tiana and Finn jump an immaculate, and rare clear show-jumping round at Gatcombe last year

I asked Tiana why she’d decided to buy an intermediate,

“I was looking at horses for a while and came to the conclusion that the best thing I could do right now would be to have another going horse to give me a bit more mileage around some bigger tracks this year. He’s not an absolute world beater, but he’s definitely turning out to be more than I thought he would, and he’s actually really starting to excite me.”

Of course, Tiana hopes to ride at the Olympics this summer, but after a year of intense and public disappointment, a period of maturity, and then success at Blenheim last Autumn she’s not taking anything for granted, but instead seizing every opportunity she can,

“Over the summer I definitely had a big high and low, and definitely had a hard time having to find my own confidence, being here with one horse and without a lot of the support that I was used to having at home, but that was something that I had to come over here and get through and come out the other side.  At the moment I can’t imagine wanting to leave and go back home, just in terms of the opportunities I’ve got available to me here. If and when I do go back home I’ve really got to start from scratch, I really closed up shop and packed things away and moved, so I would be starting anew. At the moment here I’ve got so much going for me, a lot of opportunities that I wouldn’t be able to replicate at home – the British Border Agency may or may not agree with that though, and there’s not a lot I can do about that if they don’t! I’m here on an Olympic visa until November, and thankful to have until then, and after that, we will see…I’m young, at 23 years old what else should I be doing with my life, I can’t think of anything else that would be better?” 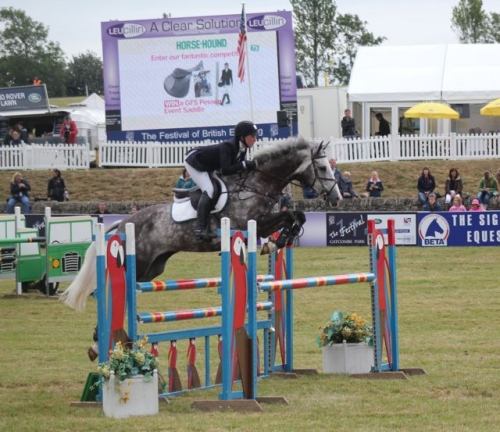 Nick is bound to agree,

“I don’t know what her plans are after the Olympics, she rides beautifully and the horse is amazing. If she has a good spring I really hope for her that she gets there, but I’d miss her about the place after that if she goes back home.”