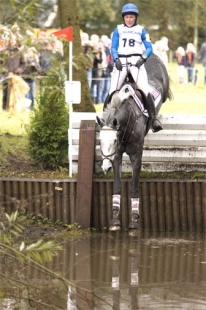 Gladstone, NJ – The United States Equestrian Team Foundation is pleased to announce that the recipient of the 2011 Lionel Guerrand-Hermes Trophy will be talented eventing rider Tiana Coudray. Each year this award is presented to a Young Rider in one of the Olympic disciplines who exemplifies both sportsmanship and horsemanship. In 2010 Coudray had a banner year, winning the Jersey Fresh CCI*** and the Galway Downs International Horse Trials CIC***, as well as leading the U.S. efforts at the Boekelo CCI*** in Holland.

“When the USET Foundation told me that I was the winner of this year’s award I went and looked it up,” commented Coudray. “I was pretty honored to look at the other names on the list throughout the years and think of what those people have gone on to do later in their careers.”

Over the years, Coudray has consistently shown her talent as a young rider. She won Team Gold at the North American Young Riders Championships in both 2004 and 2008, and took home the Individual Silver Medal in 2004. She has won the United States Eventing Association Young Rider of the Year Award an amazing three times in 2005, 2007, and 2009.

Today, Coudray is successfully competing with Ringwood Magister, a nine-year-old Irish Sport Horse that she trained herself. Coudray noted, “I have had him his whole life and this year was the first time he really put all the pieces together and consistently had fantastic results.”

Coudray added, “Everyday is a new day and I think that it’s easy to get caught up in what’s gone well, but there are no guarantees for the future. Certainly I am honored to receive the award and the opportunities that I had in 2010, like going to Holland. Hopefully it will help open the door to even more opportunities but I still have to go out and earn good results year after year. ”

Coudray will be presented with this prestigious award at the USET Foundation Reception on January 28th, in Wellington, Florida.

Patrick Guerrand-Hermès established the Lionel Guerrand-Hermès Memorial Award in 1983 in memory of his son, Lionel, who was tragically killed in an automobile accident in 1981 at the age of 18. Lionel trained with the United States Equestrian Team and was talented enough to be considered an Olympic hopeful. A perpetual trophy designed by Patrick Guerrand-Hermès is inscribed annually with the winner’s name and permanently displayed at the USET Foundation headquarters in Gladstone, New Jersey. Previous winners are: