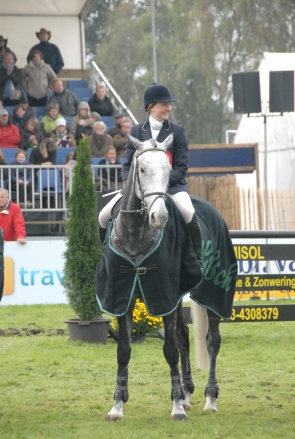 From the USEF, by Joanie Morris

The United States Equestrian Federation (USEF) sent four Eventing riders to Holland for the Boekelo CCI3*this weekend and produced a second place team result behind the Germans after a hard fought competition. Tiana Coudray (Ojai, CA) led the U.S. effort with Ringwood Magister. The nine-year-old Irish Sport Horse set the standard with Coudray in the pair’s first overseas competition. They were sixth after the dressage on a score of 46.2, added 7.6 time faults on the challenging cross country course and then jumped a beautiful clear show jumping round to maintain their sixth place position.

Will Faudree (Hoffman, NC)  was the next highest placed American, a veteran U.S. Team member, Faudree is producing a new international star in Andromaque, a nine-year-old Thoroughbred cross mare owned by Jennifer Mosing. Andromaque was contesting her first CCI3*. They made up some serious ground after the dressage with the fastest cross country round of the day on Saturday and had the very last fence down in the show jumping to move up from 51st after the dressage to 12th in the final standings.

The third score to count in the U.S. Team effort was Sinead Halpin (Gladstone, NJ) on Carriag LLC’s Manior de Carneville. The 10-year-old Selle Francais gelding was contesting his second CCI3* and the pair put in a solid effort to finish 21st out of more than 100 starters. Doug Payne (Gladstone, NJ) and Stone Hill Farm’s Running Order had their learning curve increased as they contested their first CCI3* together. Two refusals at the first water on the cross country course kept them out of the placings, but the eight-year-old Thoroughbred gelding showed plenty of promise for the future.